US President Donald Trump is expected to underline the need to confront extremism in Islam when he makes a speech in Saudi Arabia later on Sunday.

His address, to a summit of regional leaders, will come on the second day of his first presidential trip abroad.

It is expected he will attempt to strike a collaborative tone in attempts to bolster support for the US fight against Islamic State (IS) militants. 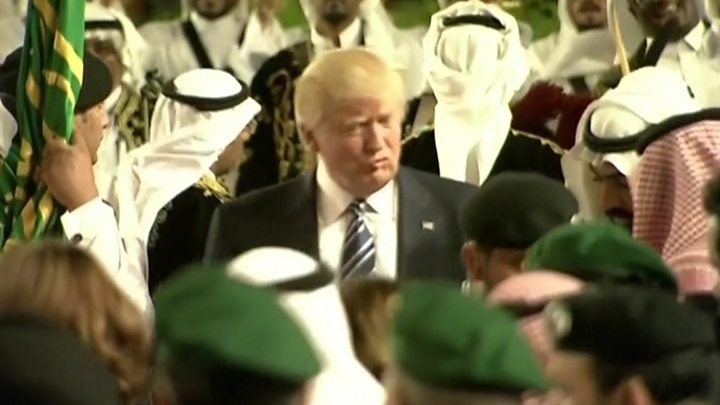 This included the largest arms deal ever made in US history, which Secretary of State Rex Tillerson said was aimed at countering the “malign” influence of Iran, Saudi Arabia’s regional rival.

But the president’s visit has been overshadowed by his political difficulties at home, namely the fallout over his sacking of FBI chief James Comey.

Mr Trump caused controversy during his campaign by calling for Muslims to be temporarily banned from entering the US over security concerns. Legislation aimed at restricting travel from several Muslim-majority countries remains tied up in the US courts.

According to a report by CNN, the same man who wrote the travel ban – adviser Stephen Miller – has written Mr Trump’s speech about Islam.

The Associated Press agency, which was given copies of the speech by two sources, said the speech aimed to cast extremism as a battle between good and evil.

AP said Mr Trump will say: “We are not here to lecture — to tell other peoples how to live, what to do or who to be. We are here instead to offer partnership in building a better future for us all.”

Mr Trump has made a number of controversial comments about Islam, including suggesting he would be open to creating a database of all the Muslims in the US, linking the religion with violence.

He has also criticised other politicians for not using the phrase “radical Islamic terrorism” – a phrase which, according to advisers quoted in the US media, will not feature in the speech.

Delicate territory: By the BBC’s Frank Gardner in Riyadh

To the relief of his hosts, day one of President Trump’s Saudi visit passed off successfully.

Bedevilled by problems back home, in Riyadh he is among newfound friends. The Saudis have sealed their rejuvenated alliance with Washington by signing billions of dollars’ worth of contracts with US firms, exactly the sort of domestic boost the president needs.

But today will be altogether more delicate territory.

At the Arab Islamic American Summit, President Trump will talk of the need for a combined front against religious extremism and intolerant ideology.

It is a message some may find hard to accept from such a controversial figure as Donald Trump but for now, Saudi officials are giving him the benefit of the doubt.

The agenda for the rest of Mr Trump’s trip

One thought on “Trump in Saudi Arabia: US president to address Islamic leaders”

Have you seen this?